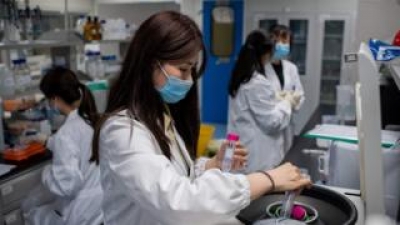 More than $8bn (£6.5bn) has been pledged to help develop a coronavirus vaccine and fund research into the diagnosis and treatment of the disease.
Some 40 countries and donors took part in an online summit hosted by the EU.
EU Commission President Ursula von der Leyen said the money would help kickstart unprecedented global co-operation.
She said it showed the true value of unity and humanity, but warned much more would be needed in the days ahead.
In total, more than 30 countries, along with UN and philanthropic bodies and research institutes, made donations.
Donors also included pop singer Madonna, who pledged €1m ($1.1m), said Ms von der Leyen, who set out the Brussels-led initiative on Friday.
The European Commission pledged $1bn to fund research on a vaccine. Norway matched the European Commission's contribution, and France has pledged €500m, as have Saudi Arabia and Germany. Japan pledged more than $800m.
The US and Russia did not take part. China, where the virus originated in December, was represented by its ambassador to the European Union.
The UN says a return to normal life will only be possible with a vaccine.
Dozens of research projects trying to find a vaccine are currently under way across the world.
Even with more financial commitment, it will take time to know which ones might work and how well.
Most experts think it could take until mid-2021, about 12-18 months after the new virus first emerged, for a vaccine to become available.
•    (Source:- BBC, 4 May 2020)

More in this category: « Africa: Spared of the worst, or bracing for the worst? Tanzania’s president is blaming the sharp rise of coronavirus cases on faulty testing kits »
back to top